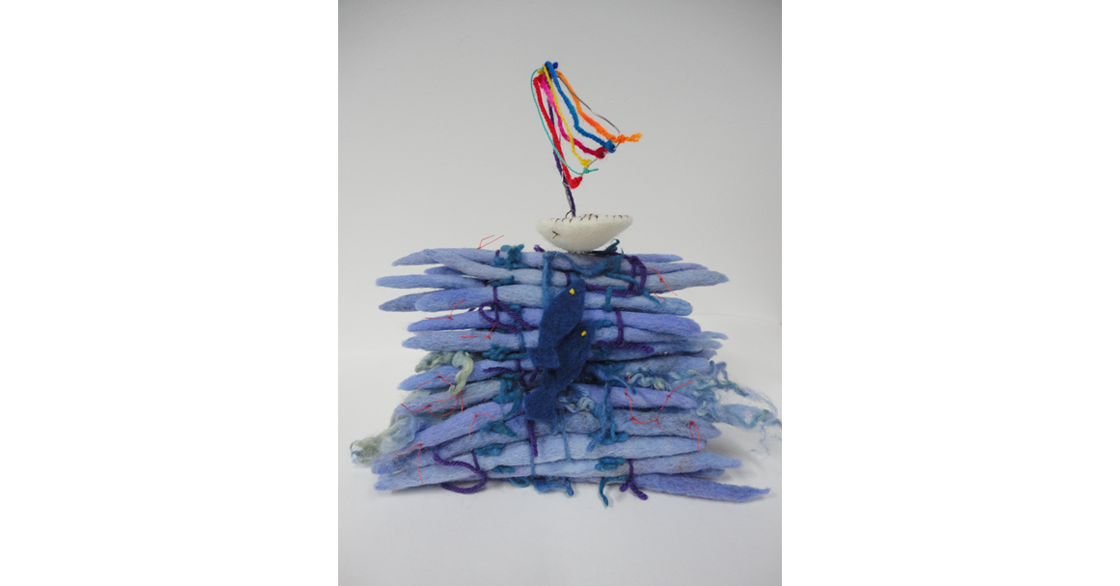 Towards the end of 2016 I realised that I love working with wools and fibres and decided to join the International Feltmakers Association.

They put out a call for submissions for an exhibition to be staged at Belsey Bridge, Ditchingham, Suffolk from 6th – 9th April 2017 where they are staging their annual conference and AGM.  The theme was “Sea and Sky” and the dimensions of the work were quite limited as the intention is for the pieces to be able to fit comfortably into a shoe box if they had to be posted.

I completed my 3D sculpture and filled out the application form.  A month or so later I was delighted to receive an email informing me that my submission has been accepted.  This will be the first time that any of my work has been exhibited outside the county and there is a possibility that the exhibition may travel around the country, but this is still to be confirmed.

The following is the statement which I included with my submission

My piece attempts to bring a poetical and personal connection on a small scale to the very large theme of Sea and Sky.  The vastness and vacancy of such mammoth spaces, both wide and deep, are difficult to comprehend and often the wider and further we look the less we see.  This felted sculpture/construction has been inspired by a memory of the sight of a small singular fishing boat heading out into the wide Atlantic.  Its vulnerability and isolation bringing to mind the courage of our earliest sea voyagers and explorers who set off into the unknown at the mercy of the elements and conditions.

It is impossible to think of the sea without reference to the sky.  They work in partnership and one reflects the moods and colours of the other on a constant basis.  The sail of the boat I saw was red, this one is rainbow coloured.  The promise of gold at the end of an ethereal presence which is somehow always beyond our reach just as the small boat is only ever in contact with the wider world via the ever-moving, ever-changing surface of water upon which it floats.