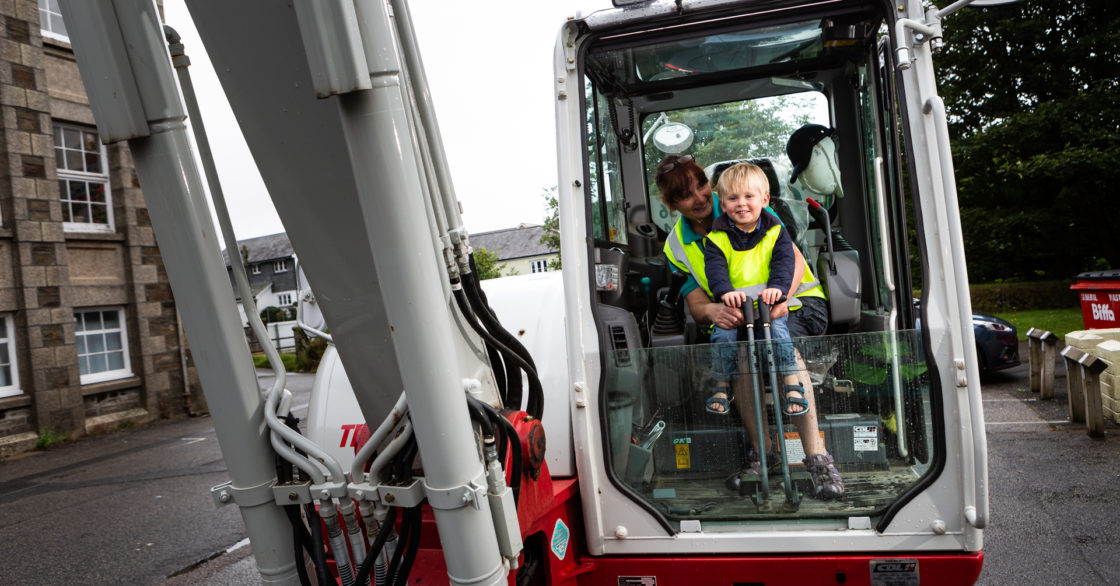 This summer Krowji’s Phase 2 redevelopment plans began with the demolition of a dilapidated part of the old 1950s Science Block by CGS Contractors.

While CGS contractors were busy working on the demolition there were some excited little assistants watching out their windows. Children at Windmill Nursery, which is located next door to the Krowji site, were given the chance to explore the digger close-up and even sit in the driving seat – if they were brave enough!

Having heard that excitement was mounting across the car park, with some of the children spying the big diggers working on the demolition and preparing the site, Krowji Studio Manager Elisa Harris arranged a special visit.

“Many of the artists, makers and designers based at Krowji have children who attend or have been through the nursery – it’s very convenient for the businesses to have such great childcare nearby – so we thought why not treat the children to something a bit out of the ordinary. CGS were enthusiastic about the idea and very accommodating so we had to make it happen!”

CGS, a Penwith based and family-run business, knew the site well having delivered all of the demolition and groundworks for Krowji Phase 1, which was completed in 2015. CGS Owner & Project Manager Neil McFadden was pleased to have the opportunity to deliver the groundworks for the second phase of redevelopment saying that “It’s fantastic to see that the success of Phase 1 means Krowji can expand further and our work can make way for the construction of more purpose-built studio spaces”. He added “As a company that prides itself on its personal and friendly approach we were very open to the digger visit idea!”

Krowji Phase 2 which is funded by the European Regional Development Fund (as part of the European Structural and Investment Funds Growth Programme 2014-2020), Arts Council England and Cornwall Council, sees the creation of 21 “BREEAM Excellent” studios. The new studios will linked by a bridge to the £3.7 million Phase 1 building. Falmouth-based Jewell Construction has won the prestigious tender to build the £2 million Phase 2 of the landmark Percy Williams Building with construction commencing in late October.