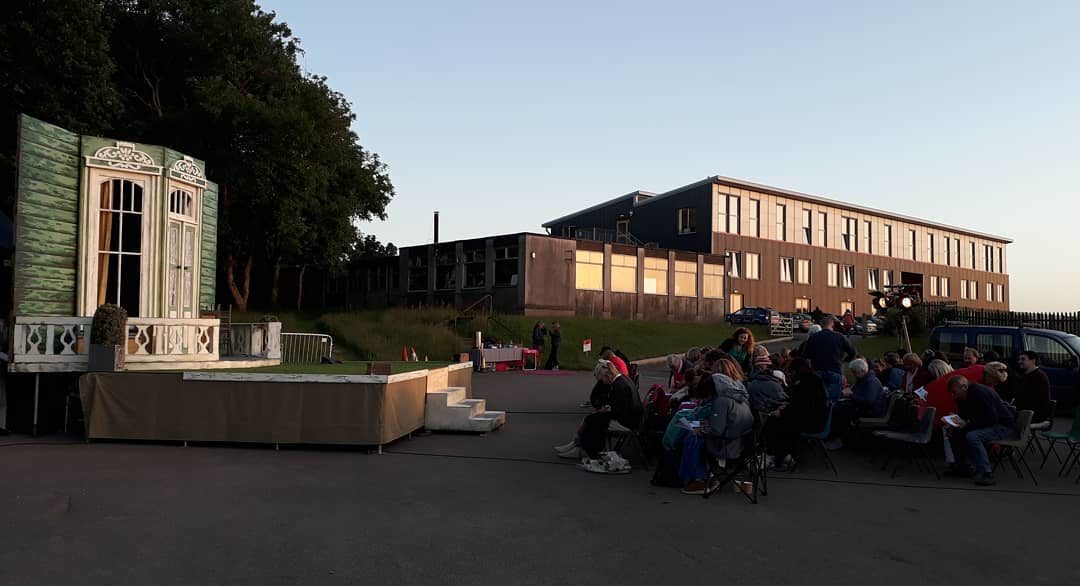 On Thursday 14th June 2018 we were lucky enough to host Miracle Theatre’s summer show ‘The Cherry Orchard’ here at Krowji in a special preview performance.

Although Miracle Theatre HQ are based here at Krowji this was the first time we’ve hosted a Miracle performance in our very own back garden! Krowji tenants, staff and local residents were treated to a preview performance of The Cherry Orchard ahead of the summer tour across Cornwall.

In the summer of 2018, Miracle unpacked Chekhov’s bittersweet comedy about a once-wealthy family, whose idleness and extravagance have brought them to the brink of bankruptcy.

Obstinate and self-absorbed, they are deaf to the rumbling of change which surrounds them, and unable to accept help when they need it.

Will it take a revolution to destroy their cosy world of privilege and entitlement – or will their own stupidity be enough?

Bill Scott’s new adaptation treads a tragicomic tightrope, bringing out all the humour and pathos of Chekhov’s masterpiece which, more than a century after it was written, is as popular as ever.

Miracle Theatre set up their travelling stage in our lower car park and the show began with an introduction by Director Bill Scott. There were a few unfinished elements to the set and costumes, but nobody seemed to notice!

The show was a great success. The actors from Miracle Theatre really pulled out all the stops, some actors playing as many as three characters! The show then travelled to over 35 other venues around Cornwall, the Isles of Scilly and across the border to Bath, Exeter, Dorchester and Marlborough.